From "something" on the table back
to being "someone" alive. What if? 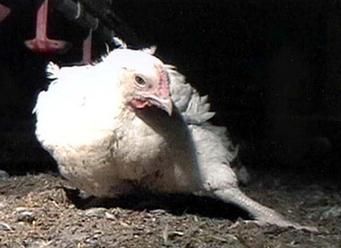 The following information is fromFarmSanctuary.org

Debeaking, an Agonizing Mutilation: Half of chicks' very sensitive beaks are chopped off by using a searing hot blade. This is done to minimize damage they do to each other in crowded conditions, due to their natural instinct to peck.

Promoting the compassionate and respectful treatment of Domestic Fowl. 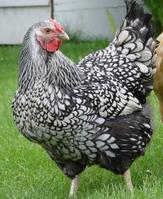 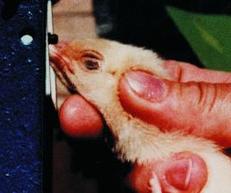 growth leads to frailty,
​lameness and heart failure.
​"Studies have consistently shown that many broiler chickens suffer from difficulty walking because their skeletons have trouble supporting

their rapidly growing bodies. This also leads to deformities and lameness.

"The hearts and lungs of the rapidly growing birds are not able to get oxygen effectively circulated throughout the body. This problem is the leading cause of death in chickens as they reach “market weight.

No legal protections for slaughter.

"• There is no law in place requiring chickens to be rendered unconscious before slaughter.

• The electrified water bath stunning used has been shown to cause painful shocks before it stuns the birds.

• Stunning renders them unable to move, they are still conscious when their throats are slit."

"Chickens raised for meat are selectively bred to grow to “market weight” at an alarming pace. In the past 50 years, the amount a chicken used for meat grows each day ​has increased by more than 300%.

"With bodies taxed beyond belief, chickens who survive their time in production are often slaughtered at just 42 days old.

"They are still 'peeping' the sound of baby chicks when they are killed, even though their bodies have ballooned to the sizeof giant adult chickens in this short time due to industry practices."
– FarmSanctuary.org 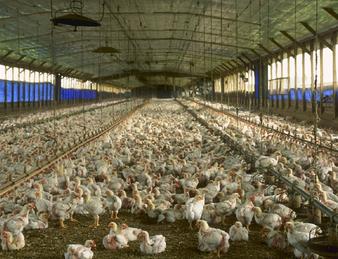 Chickens are sent through an electrified "bath" prior to having their throats slit. They arerendered immobile yet still conscious. Slaughter lines move very fast, sometimes the chickens sway in the process and the blade misses their throat. Then they enter the scalding tank to be boiled alive.

If your food came to life, would you kill it again?

Posted by Best Video You Will Ever See on Monday, December 28, 2015 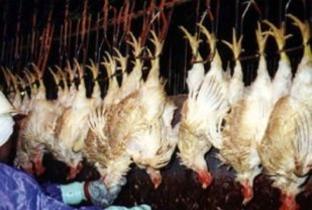 "Every year, many billions of chickens are slaughtered for meat in the United States. Called “broilers” by the industry, these curious, social birds are treated simply as production units, selectively bred and fed for abnormally fast growth without consideration for their well-being.

​Confined and crammed together.

"Chickens spend their lives confined to warehouse-like buildings, each packed with as many as 20,000 [or more] chickens. On average, the space per chicken is only slightly larger than a sheet of letter-size paper. This extremely stressful crowding results in scratches and sores from the birds being ​forced to walk all over each other.

Arsenic added to their feed remains in chicken flesh.
"A 2006 study found that 55% of uncooked chicken purchased from supermarkets contained arsenic, which is known to cause cancer in humans. Arsenic
is added to the feed of approximately 70% of the broilers raised each year to promote growth.

​Living among their own excrement.
​"Since more than one flock is sometimes kept on
the same litter before the floor is cleaned, floors
​can be covered in the waste of tens of thousands of chickens. Excessive ammonia levels that can result from ​the waste breaking down can lead to health problems for chickens, including difficulty breathing.

"The lights are kept on nearly constantly in the buildings where chickens raised for meat are confined. This can stimulate eating and unnaturally rapid growth and limits the opportunity for chickens to sleep and rest,​all of which leads to serious health problems."​

Chicken living at a farm sanctuary. She lives free from harm, dust bathes, sun bathes, perches in trees, has friends, engages in her natural curiosity, and keeps busy roaming as she pleases.