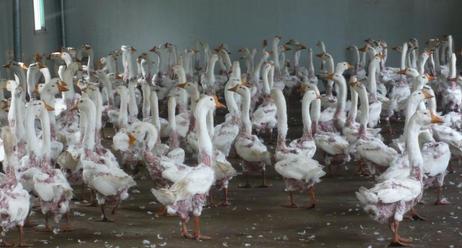 "Some readers might prefer not to watch the graphic video, which shows geese, their feet restrained or held down by their necks, with farm workers pulling their feathers and undercoating off their skin, leaving open and often bloody wounds in the process.

"We visited 11 farms, and many we went back to multiple times to make sure it wasn't a one-time thing," said the PETA worker. "One producer we spent eight hours with, and it was not difficult to get live-plucking discussed, and to see and learn about it. Their attitude in general is animals are insignificant."

"PETA said its investigation offers evidence that retailers including Lands' End, Eddie Bauer and Hollander Home Fashions inadvertently had live-plucked down in their supply chains, despite a certification process involved in the Responsible Down Standard (RDS) that mandates the feathers are "non live-plucked."

Lands' End, Eddie Bauer and Hollander all expressed concern about PETA's findings and said they were taking additional steps to address the issue.

"A good night's sleep can come with
a hidden cost that consumers are
likely unaware of. The highest grade
of down, used to make the most
comfy and costly bedding, involves
a practice called live-plucking.
That's when feathers and the
under-coating of geese and ducks
are pulled off their skin while the
​waterfowl are still alive.

"Most retailers and their suppliers follow voluntary standards meant to ensure that live-plucking isn't part of their supply chain. But People for the Ethical Treatment of Animals (PETA) has released disturbing video taken by undercover PETA workers who visited nearly a dozen farms over a month-long period last fall in China, which produces roughly 80 percent of the world's down."

"Eye witnesses found live geese are being plucked on farms linked to responsible down suppliers. These down products are exported throughout the world and sold to consumers who don't understand the complexity of the supply chain," said Anne Kellogg, PETA's manager of corporate affairs. "This investigation shows there is no way to tell whether down is live-plucked just by looking at it."

Acquiring down feathers is among the most inhumane practices ever invented.

Consider the classic statement, "Do unto others as you would have done unto yourself." Everyone agrees this is fundamental ethics. However, when someone is seen as having a utility purpose, we forget this most basic principle of kindness. Acquiring down feathers is among the most inhumane practices ever invented.

Down Feathers from Ducks

"A foul truth behind the down in pillows and comforters." 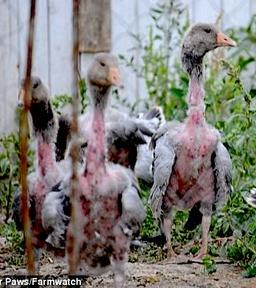 "It's horrific to see and hard to describe," said the PETA worker who shot much of the video and spoke to CBS MoneyWatch on condition of anonymity due to the nature of her work." 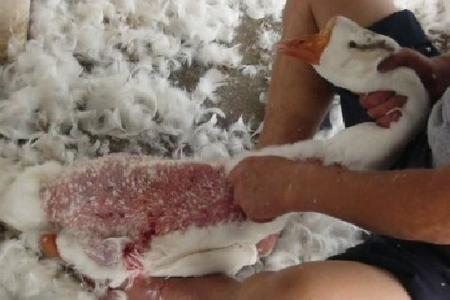