​​More than 70 rabbis have signed a statement urging their fellow Jews to transition to plant-based diets.

"Judaism’s way of life, its dietary practices, are designed to ennoble the human spirit. It is therefore a contradiction in terms to claim that products that come through a process that involves inordinate cruelty and barbarity toward animal life can truly be considered kosher in our world. In our world today, it is precisely a plant-based diet that is truly consonant with the most sublime teachings of Judaism and of the highest aspirations of our heritage.”
~ Rabbi David Rosen,
Former Chief Rabbi of Ireland

"God’s First Conversation
with Humankind: Eat Plants!"
"And God said: 'Behold, I have given you every herb yielding seed which is upon the face of all the earth, and every tree that has seed-yielding fruit -- to you it shall be for food.' (Genesis 1:29)
There is no disputing that, according to the Torah, God asked human beings to be vegans in his very first conversation with Adam and Eve. In fact, God issued those instructions right after he gave humans 'dominion' over the animals. So it is clear that 'dominion' does not include killing animals for food.
"The great 13th century Jewish philosopher Nachmanides explained God’s reason for excluding meat from His dietary ideal: 'Living creatures,' Nachmanides wrote, 'possess a moving soul and
a certain spiritual superiority which in this respect make them similar to those who possess intellect (human beings) and they have the power of affecting their welfare and their food and they flee from pain and death.'
"Another great Medieval sage, Rabbi Joseph Albo, offered an additional reason. 'In the killing of animals there is cruelty, rage, and the accustoming of oneself to the bad habit of shedding innocent blood,' Rabbi Albo wrote.
"Immediately after giving these dietary instructions, God saw everything that he had made and 'behold, it was very good"' (Genesis 1:31). Everything in the universe was as God wanted it, with nothing superfluous and nothing lacking, a complete harmony. Veganism was part of that harmony.
"Today, some of our most prominent rabbis are vegan or vegetarian, in accordance with the Torah ideal. And it is no coincidence that a vegan diet
​is the simplest way to be kosher. 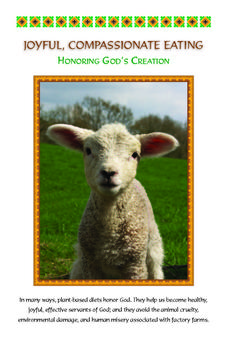 Why I'm a
​Christian Vegan
"Ever wondered if you could
forego all animal products?
Tips and guidance for pursuing
a diet that focuses on loving
our neighbors as ourselves."
By Maggie Olson

"These are the creatures created by God, the "livestock, small animals that scurry along the ground, and wild animals" (Genesis 1:24). These
are the creatures over which God has given us dominion. God tells us, "clothe yourselves in tenderhearted mercy, kindness . . ." (Colossians 3:12). There is no compassion in factory farming,
no kindness in the treatment of these poor creatures that God created. As Christians, we are called to reach out, to protest, to fight—not to affirm this practice for the sake of our own gain."

Fostering Neighborly Compassion
"This compassion extends to our neighbor, as is stated in God's second greatest commandment:
you shall love your neighbor as yourself (Mark 12:31). It's easy to forget about one's neighbor while standing at the deli counter or comparing prices on ground beef, but our food choices at the local grocery store affect our neighbors both near and far. Among those most heavily impacted are the economic lower classes, both at work and at home. Slaughterhouse workers face some of the most dangerous working conditions and lowest wages
in America. Injuries incurred in slaughterhouses
and packing plants are often ignored and underreported, leaving workers bankrupt
or crippled."

​       "As Christians, we are called to compassion
​and love. I have found that a vegan diet helps me live out that compassion, and provides me the opportunity to examine the real ramifications of
​my daily choices. Daniel and his men ate nothing but veggies while in King Nebuchadnezzar's palace, and "at the end of the ten days, Daniel and his three friends looked healthier and better nourished than the young men who had been eating the food assigned by the king" (Daniel 1:15)."