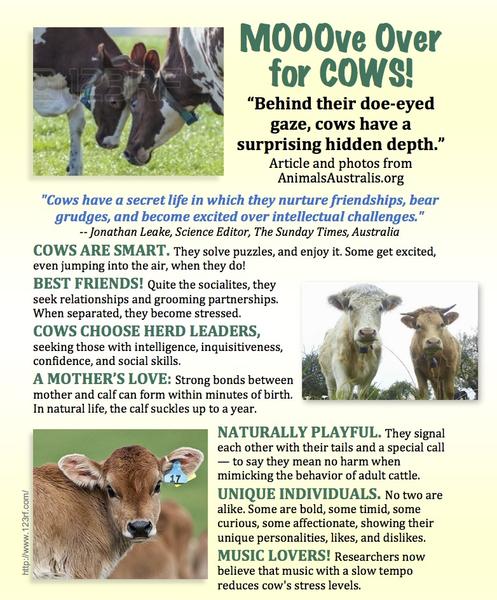 "Between 6 months and a year of age, cattle are moved
​from pasture to feedlots, known as confined animal feeding operations (CAFOs) to be fattened for slaughter. Calves gain weight on an unnatural diet and reach “market weight” of 1,200 pounds in just 6 months. [Antibiotics and hormones are given to cows to help fatten them up for market.]

"The majority of cattle are fattened in feedlots in just four U.S. states. Since calves are born all over the country, they often endure long and stressful trips from their place of birth to these states without food, water, or protection
​from the elements.

"Once they reach “market weight,” cattle in the beef industry are trucked to slaughter. The "Humane Methods
of Slaughter Act" requires that livestock be rendered insensible to pain before shackling and slaughter; however, investigations have found that some animals
​are still conscious when they are shackled and have their throats cut.'

"Often beginning their short lives on rangeland, calves are soon separated from their nurturing mothers and endure a series of painful mutilations with no pain relief [such as dehorning,

IF THESE WERE DOGS PEOPLE WOULD BE OUTRAGED, AND THIS WOULD BE ILLEGAL.

The Unnatural Life of Feedlot Cows,
Their Unnatural Corn-Diet,
​and Living Among Their Feces

"Cows see very little grass nowadays in their lives. They get them on corn as fast as they can, which speeds up their lifespan, gets them really fat, and allows you to slaughter them within 14 months.

"The problem with this system, or one of the problems with this system, is that cows are not evolved to digest corn. It creates all sorts of problems for them. The rumen is designed for grass. And corn is just too rich, too starchy. So as soon as you introduce corn, the animal is liable to get sick.

"It creates a whole [host] of changes to the animal. Here's where you teach them how to eat corn. You start giving them antibiotics, because as soon as you give them corn, you've disturbed their digestion, and they're apt to get sick, so you then have to give them drugs. By feeding them what they're not equipped to eat well, we then go down this path of technological fixes, and the first is the antibiotics.

"Most cows on feedlots eating this rich diet of corn are prone to having their livers damaged. So to prevent that, or limit the incidence of liver disease, we have to give them another antibiotic.

"The cows I saw on the feedlot looked sullen. I'm very concerned not to anthropomorphize them, but that was how they appeared to me. They're standing around in their manure all day long. Animals have evolved basically to avoid their feces. Natural selection discourages this, because there are parasites in diseases.

"When the animals arrive at the meatpacking plant from the feedlots, they're carrying quite a bit of manure. They've been sleeping in it and resting in it, so their bodies are caked with it. So you need to make sure that you remove their hides in such a way that you get all of the manure, and none of it ends up on the meat. And a great deal of the effort, which is now 99.9 percent of the time successful, is essentially keeping the manure out of the meat. But it doesn't; it's not a perfect system. And it's bound to happen, and does happen."

The life that commercial cattle
​never have the chance to live: 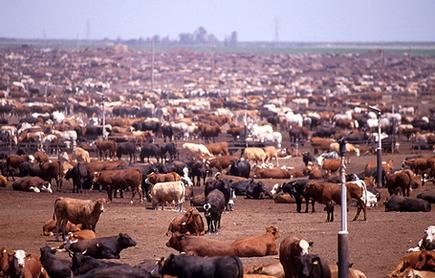 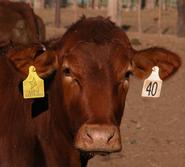 castration, branding, ear tagging[. Before they are a year old, young calves endure a long and stressful journey to a feedlot, where they are fattened on an unnatural diet until they reach “market weight” and are sent to slaughter.

"After being taken from their mother, calves’ cries can
be so intense that their throats become irritated. Cow mothers often cry out in agony for days after their calves have been taken away.

"Calves raised for beef may be subject to a number
of painful mutilations, including dehorning, castration, and branding. Even though each of these procedures is known to cause fear and pain, pain relief is rarely provided. Because it is thought to improve meat quality and tenderness, male calves are castrated at a young age. Methods include removing testicles surgically with a scalpel, crushing spermatic cords with a clamp, and constricting blood flow to the scrotum until testicles
die and fall off. Each method is known to cause pain
​that can last for days.

"Cattle in the U.S. are often branded by having an iron
hotter than 950°F pressed into their skin for several
seconds. This is done so that beef producers can identify
​cattle and claim ownership.

​From Birth to the Kill Floor​
By Farm Sanctuary