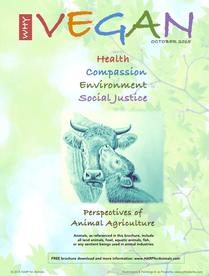 History and Meaning of  "Vegan"

​Donald Watson, from Great Britain, created the term ‘vegan’ in 1944. He was a founder of The Vegan Society, which became a registered charity in 1979. The Memorandum and Articles of Association updated the definition of veganism as:

"A philosophy and way of living which seeks to exclude — as far as is possible and practicable — all forms of exploitation of, and cruelty to, animals for food, clothing or any other purpose; and by extension, promotes the development and use of animal-free alternatives for the benefit of humans, animals and the environment. In dietary terms it denotes the practice of dispensing with all products derived wholly or partly from animals."

A lifestyle that saves animals,
the environment, and much more.
Still eating animals?
Try calculating how much
you can save in just one year.

Are You Vegan?
Calculate how much you've saved
​since making the switch!

1944 Newsletter by Donald Watson, who
co-created the term "vegan" with his wife, Dorothy.

Excerpts:
"The unquestionable cruelty associated with the production of dairy produce has made it clear that lactovegetarianism is but a half-way house between flesh-eating and a truly humane, civilised diet, and we think, therefore, that during our life on earth we should try to evolve sufficiently to make the 'full journey'."

"Our Members are pronounced individualists, not easily scared by criticism, and filled with the spirit of pioneers, and one feels they will never allow their magazine to degenerate into a purely secretarial production."

H.O.P.E. What You Eat Matters