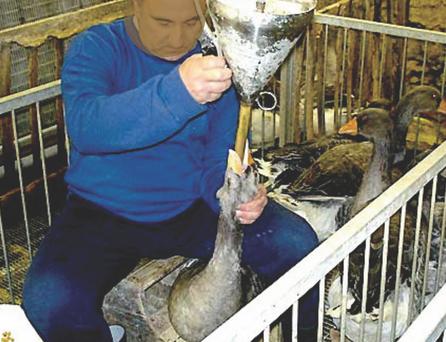 "It is a common misconception
that it is predominantly geese
killed for foie-gras production
in France. However, the majority
of birds used to produce foie-gras
in France are actually ducks
​(98.3 per cent), with geese making
up around 1.7 per cent. In that
​country alone over 44 million birds are killed for foie-gras each year (France Agri Mer Donnes Satistiques, 2015)."

"The force-feeding of birds, that are often confined and with no means of escape, is both cruel and damaging to their health. Feed is administered using a funnel fitted with a long tube, forcing it into the bird's oesophagus. Modern systems use a tube fed by a pneumatic or hydraulic pump. Force-feeding can cause violent trauma to the bird's oesophagus, which can lead to death. Around a million birds die during force-feeding in France every year (French industry figures). Premature death rates among force-fed birds is up to 20 times higher than those reared normally. Force-feeding also causes the liver to swell to up to ten times its natural size, impaired liver function, expansion of the abdomen making it difficult for birds to walk, death if the force feeding is continued, and scarring of the oesophagus (Scientific Committee on Animal Health and Animal Welfare, 1998).

"Typically, birds used for foie-gras will be free-range prior to force-feeding. Geese are not caged in foie-gras production, but 87 per cent of ducks are confined to small wire cages not much bigger than their bodies (or increasingly groups cages), where only their heads are free to facilitate force feeding (OFIVAL, 2003). The remainder — and most geese — are enclosed in small enclosures (pens)." 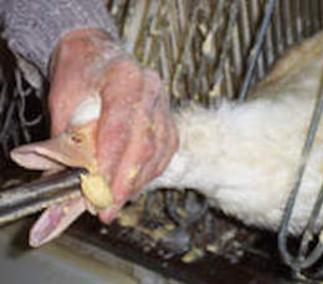 Information on this page has been reprinted from Viva!'s website.
​
"Foie-gras (French for "fat liver") is "the liver of a duck or a goose that has been specially fattened by gavage" (as defined by French law). Gavage is the process of force-feeding birds more food than they would eat in the wild, and much more than they would voluntarily eat. Feed is usually corn boiled with fat, which deposits large amounts of fat in the liver. This process essentially causes a disease of the liver (hepatic steatosis), which would invariably be fatal if the birds were not slaughtered." 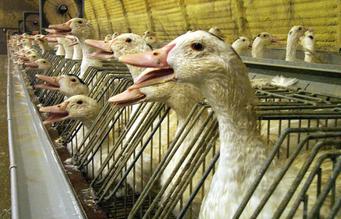 "Only male ducklings are used in French foie-gras production (as they put on weight quicker and their livers are less veinous), almost all females are killed at just a day or two old by either being gassed or thrown alive into industrial macerators (as many as 43 million annually)."

French rural code L654-27-1: "On entend par foie gras, le foie d'un canard ou d'une oie spécialement engraissé par gavage." ("By "foie gras" one is to understand the liver of a duck or a goose that has been specially fattened by gavage")

Report of the Scientific Committee on Animal Health and Animal Welfare on Welfare Aspects of the Production of Foie-Gras in Ducks and Geese (Adopted 16 December 1998).

(GATT) General Agreement on Tariffs and Trade, Article 20 (b)

"Despite an EU wide ban on individual cages (which came into force in January 2011) France has flouted this ruling since. The French government has pledged to pass a European directive into law and ban individual cages at the end of 2015. It remains to be seen if this actually happens. Individual cages will be replaced by group cages, where birds are pinned to the floor by a mechanical arm to be force-fed. This group housing is still a far cry from a natural environment and could aggravate aggression and exacerbate – or cause – injury to birds. Footage obtained by Viva!/L214 shows such a system with birds with bloody injuries trampled upon by other ducks."

"With around 72 per cent of world production, France is the leading foie-gras producing country (after declining slightly in 2013, production in that country rose 1.4 per cent in 2014). This growth can partly be attributed to increasing export markets in countries such as Hong Kong, Vietnam and South Korea. Foie-gras is also produced to a lesser extent in Hungary, Bulgaria, the United States, Canada  and China (Xinhua, 2006). In 2014, France produced 19,300 tonnes of foie-gras (production has roughly doubled since 1994). World estimated total production is around 26,600 tonnes."